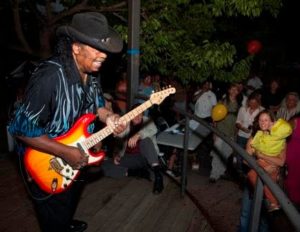 Besides the visual arts, Santa Fe also has a vibrant and diverse music scene.  This coming summer there will be plenty of live music to hear with a variety of festivals and special concerts.  Take a look at a few of the events happening in June and July that are worth listening to.

This annual festival in Americana and roots music offers a range of local talent and national touring acts.  Santa Fe Sol is located just south of Santa Fe, and proudly boasts an outdoor performance space in addition to it’s indoor stage.  This year’s lineup includes: Mary Gauthier, Sister Carol, The Legendary Shack Shakers, and many more!  Concurrently, there will be an arts & crafts exhibit happening.

The three day event examines the theme of “Music as Environmental Consciousness,” conceived in homage to popular modern composer, John Cage.  The festival will include several new works by young composers who are continuing on with Cage’s tradition of hearing all the world as music.  While you may not walk away humming any catchy melodies, you’ll surely be intrigued by the variations in the sounds produced.

This is a worldwide ‘Day of Music’ taking place for the first time in Santa Fe.  Originally started six years ago in New York as a day long event for amateurs and professionals to create music in public spaces.  Santa Fe’s version will take place at the Railyard Park and feature a children’s music presentation, a brass quintet, Anthony Leon & the Chain, Havana Son, and The Attitudes.

Santa Fe’s premier wind ensemble presents their second concert of the season, “It’s About Time”.  Rather than have a permanent music director, Concordia Santa Fe features a guest conductor for each performance.  For this concert, Dr. Paul Shewan from Roberts Wesleyan College will be leading the group.

This free summer music festival presents a wide range of performers on the Santa Fe Plaza Bandstand.  Concerts are Monday through Thursday at 6pm, and noon on Monday and Wednesday.